A procedurally-generated “blackout” poem created for National Novel Generation Month 2016. Using the source material A Vindication of the Rights of Women by Mary Wollstonecraft (1792), lines of poetry are created by blacking out all but a few words on each page. Each page is created by the program without human intervention, though the final work was selected and ordered by me. Read The Days Left Forebodings and Water [45 page PDF].

Blackout poetry was popularized by Austin Kleon as Newspaper Blackout Poetry, but owes a creative debt to works like A Humument by Tom Phillips. 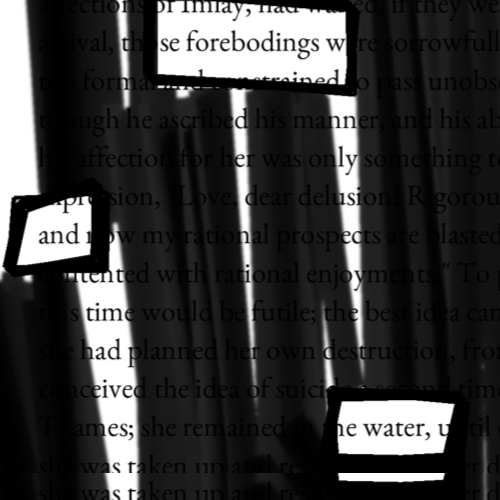 The program takes an image of a page of text, as from a scan of a book. It runs optical character recognition against that image, which identifies the words and their physical positions on the page (as bounding boxes).

The scanned words are fed into a natural language parser, which categorizes each word into its part of speech.

The software is given a set of canned grammars, MadLibs-style—for example, “Article nouns verbs article noun.” Given one of these grammars selected at random (implemented using Tracery), the program will pick words off the page that match that grammar.

Then it will draw around those words and “scribble” out all other text on the page image. Pen width, line length, line direction, number of strokes, and stroke opacity are all randomly fuzzed. The pen color is usually black but rarely and randomly, blood red. 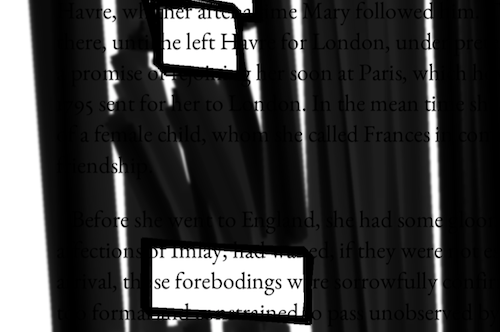 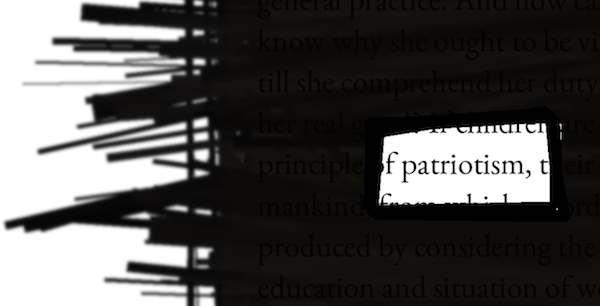 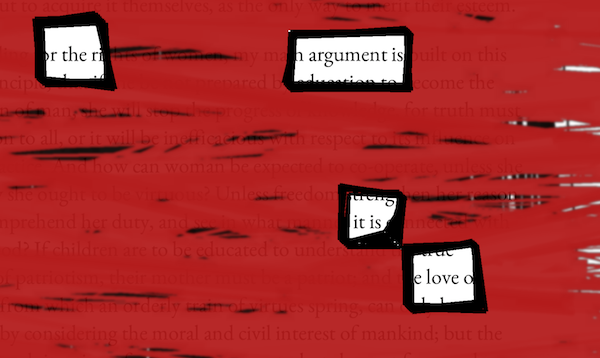 Each sentence was generated by the computer, but I chose from those and ordered them into the final work on November 9, 2016:

The days left forebodings and water

such bodies and features selected this creature.
simple excesses, and men, set this temper;
some fellow rises astray, foolish power destroys a sense

an abhorrence, is why

the humours and minds struggling the public moves to argument.
some deliberations resemble reasons, the morals, and monster impress.

The truth was opinion

this man rears force, any intercourse is patriotism, the passions have passions, and every eminence comes to light
the duties gratify pleasures and the person exercises her mind

the books nourished mists and the state is quicksand
the male divides out class, the truths involved prejudices, innocent dupes fall thus

the state is force, the civilization is blood? human morality destroys often
the arts built? things

the mind is beauty my fate tears forward
your interest is power, weak docility is human

jargon is nothing
great sweat inspires mankind
some answers being happiness, and laws keep this path

the wife checks warfare, the women married poets
the man is power
no women, supposed, slaves
clear action is reason

future youth flows to the conversation
the constitution prevails reason

the argument is love